Trip to Atacama, a desert between heaven and earth

In Chile, the place believed to be the driest in the world also offers the purest azure and unreal panoramas.

In some areas, it would not have rained since… four hundred years. Nestled between the Pacific Ocean and the Andes mountain range, the Atacama Desert, which rises to 4,678 m above sea level, nevertheless offers breathtaking landscapes.

To reach it, you, unfortunately, must leave the village of San Pedro de Atacama – from there, you can head to the Altiplano and reach the largest salar (saline deposit) in Chile, which unfolds at the foot of the majestic volcanoes Licancabur (5,916 m) and Lascar (5,592 m). A first stop is necessary towards the Chaxa lagoon, where the pink flamingos have taken up residence. The scene captivates at sunrise when the sky catches fire and their image is reflected in the mirrors of water lined with saline concretions with brilliant whiteness.

Via a road that seems to unwind its bitumen to the horizon, we reach the 4,000 m altitude. Beware here, at the puna, the acute sickness of the mountains! To alleviate the symptoms, we can use an ancestral remedy: drink an infusion – very bitter – of coca leaves. We then reach the site of Piedras Rojas and its emerald lake set with red rocks, color related to the oxidation of iron.

The road trip continues, a few hundred meters higher, to the Miscanti and Miñiques lagoons, which reveal another striking picture. Overlooked by the two eponymous volcanoes with sparkling eternal snows, circular lagoons with deep blue contrast in the middle of the pajonales, these grass meadows that host a protected fauna (vicuñas, guanacos, Darwin nandous …).

Going back down to San Pedro, it is impossible to miss the majestic Valley of the Moon, and a little further, the Valley of Death. With its canyons, pointed ridges, ravines, and its “big dune” beaten by the wind, the desert plunges into an unreal panorama. And even more so at sunset, when its ochre tones ignite as far as the eye can see and the moon invites itself into the scenery. 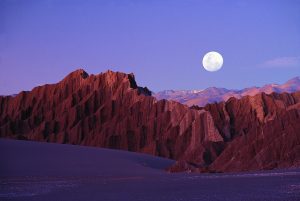 The enchantment does not die out at nightfall. Drought, altitude, and absence of light pollution make the sky of Atacama one of the purest in the world. Of course, you can observe the stars with the help of telescopes, but, with the naked eye, the spectacle is already breathtaking. Especially while sipping pisco in one of the deckchairs of Nayara Alto Atacama, the only hotel in the region to have a 360-degree observatory in the middle of nature.

We then embrace the entire celestial vault while watching for shooting stars. Enough to keep us awake until dawn, the best time to discover the geysers of the Tatio. The vision of these craters spewing columns of white steam up to several meters high offers the impression of having indeed landed on… another planet.